Boomer Women, Suivez Moi! A Look at Age in Our Culture 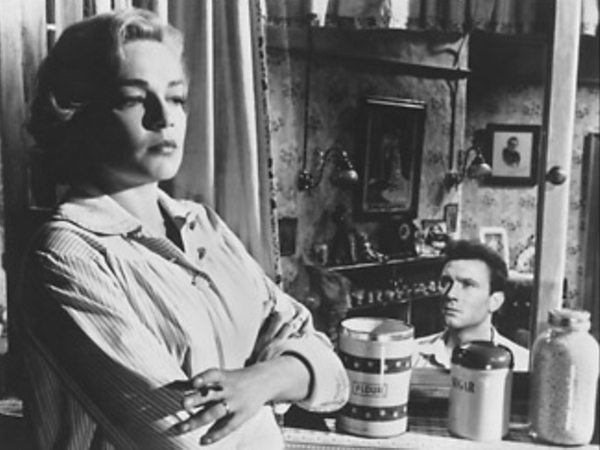 I rented a video of Room at the Top the other night—you know the one with Lawrence Harvey as a poor young man hellbent on moving up in post-war England, and Simone Signoret as the “older woman” he loves and leaves for a young heiress? I settled in for a major cocooning evening, watching a great old broad play out a doomed love affair.

But what was this? Signoret looked fabulous. Slim-waisted, sexy. Young. If I saw her and this weeby Harvey guy in a restaurant or strolling along a city street, I’d wonder what she saw in him.

I backed up the tape. Say that again, Simone? And she did.

Stunning. Did everybody back then think 35 was old? Or maybe the writer was just far too young to be writing about grownups’ lives. I wanted Signoret to refuse to say the line, or to bust out laughing when she said it.

But I hadn’t laughed when I first saw the film. Back then, the idiot-who-was-me thought Signoret was old.

I got curious and rented Sunset Boulevard. That one was about a really old woman and her young lover, right? So I’m watching William Holden ask Gloria Swanson—“How old are you, 50?” and I suddenly understand something weird about our times.

Here’s this powerful cultural programming that says 50-year-old women are grotesque hags, tragically sidelined from their work and from the really important thing—attracting men.

But but but—today I could tell you about dozens of women born 50 plus years ago who are feeling great, doing their best work ever, and lookin fiiine. They’re in the vanguard of the baby boomers, with millions more close behind them.

So what we’ve got here is a major mismatch between our reality and our programming. What’s a 50-year-old woman to think when she knows she’s never been better and the most beautiful woman on current magazine covers is 6 year-old murder victim? When she knows that 45-year-old Meryl Streep almost didn’t get the part of the 45-year-old heroine of The Bridges of Madison County, opposite an actor old enough to be her father, for heaven’s sake? When she sees that the models used to sell clothes to her are 15? When...

Never mind—I have a proposal. What if we just don’t buy into the madness? What if all of us grownup women refuse to say the lines, to play the hag? What if we bust out laughing if and when anyone says or even hints that we’re too old for anything we set our minds to do, have or be?

Trust me. It works. You see, I am not a boomer woman, born after World War Two. I was born before that war. I am in fact the age at which the Beatles wondered if you’d still need them—64. That’s almost 30 years older than the too-old-to-live woman in Room at the Top. It’s 14 years past the hag on Sunset Boulevard. And I don’t have any more time to talk to you now because I gotta finish up some cool stuff I’m doing at the best job in the world and go meet my buff, boomer husband for our tango class.

Too old? You gotta be kidding.