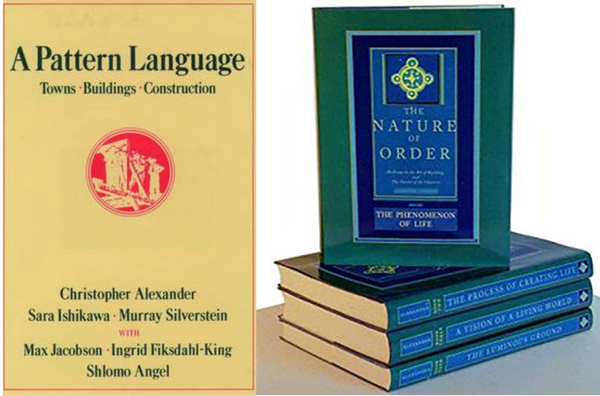 There won't be a primer here on Chris's work—there are plenty of other places for that; I've given you links to many of them—just click on More at the end of this post. If you already know his many books and projects, then jump right into this account of how the Whidbey House—or as I call the place, Dromnavarna, came to be. THE TOUR is a good place to start.

The image above is of just a few of his major books. Beastly expensive but available in libraries and highly recommended. He was a writer as well as a scientist and an architect.

Here's a wonderful bit of history—Chris debating Peter Eisenman at Harvard, in 1982. That's a transcript plus an analysis of the views of these two architects, the totally cerebral Eisenman, and Chris, who went beyond cerebral to understand the element of feeling in architecture, which he found lacking in the works of people like Eisenman.

To the profession and to those who study and write about architects, Eisenman was cool. His idea of creating deliberately disturbing buildings to match the awfulness of the world was popular among architects who, I think, see themselves as artists not architects. That's a problem.

You want to echo, explicate, and amplify the horrors all around us? Be an artist. Go paint a "Guernica." Write a dissonant symphony. Choreograph a dance macabre. Write a condemnation of evil.

But do not make places where we humans live and work.

We need refuge, revitalization, restoration, so we can survive and repair, strengthening ourselves to deal with all those disruptive forces that beset us. We need discord and disruption in our buildings like we need a hole in the head.

The two of them are amiable and mostly respectful of each other, though Eisenman does compare Chris's work to Mantovani's music, and Chris does tell Eisenman that he and his ilk are "fucking up the world."

I'm with Chris on that.

Here are some links to videos of him talking about what he does, in case you'd rather watch and listen than read...

Christopher Alexander; Life in Buildings ~ a 20-minute trailer for a film-in-progress. Includes some recent footage, filmed in his Sussex home.

A little over an hour, this is one is Chris in 1996 talking to computer geeks in San Jose about their fascination with his work and their use of it in programming. He doesn't really get what they're up to and is quite amusing about that. If you've come to his work because you're a programmer, you'll love this.

Here's sixteen minutes of Chris at 75 talking to the Urban Design Group about the practicalities of making beautiful buildings, in person, not just doing a CAD drawing and handing it to a builder. It deftly explains how he built Dromnavarna, as well as his way larger works.

This talk at Berkeley is long, slow, and sad. It's dated February 24, 2012 and may be his last public presentation. Chris is obviously not well and is clearly having a hard time. Everything he says is on the mark, but the pauses are painful to witness. For the record, here's almost two hours, with some marvelous images from his enormous project, the Eishin University in Tokyo. I treasure his good humor as he struggles to sum up his life's work.