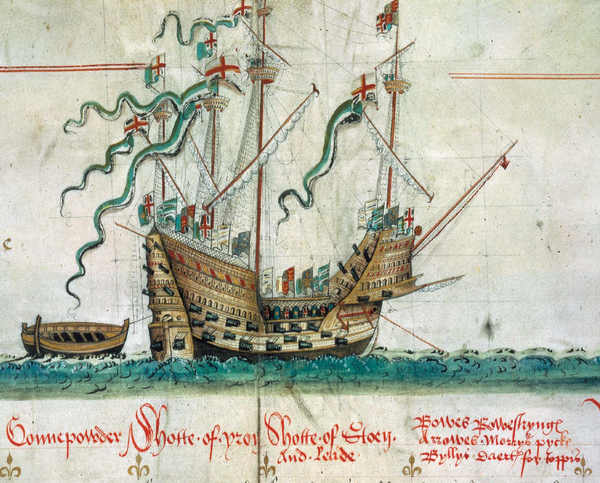 CHRIS, CHARLES and THE MARY ROSE

A few years after we moved into the house we built with Christopher Alexander, a guy who had also been a client of Chris’s told us an interesting story.

He said that Prince Charles had asked Chris to design a museum to house the Mary Rose, an English warship Henry VIII had watched sink in 1545. It had been found under the mud of the Solent River and was being restored, an exciting moment in British history.

Chris and the team at his Center for Environmental Studies had set to work back in California and, when some ideas were ready, Chris flew to London to show them to Charles.

Arriving at the palace for the meeting, he was told that the Prince had left for Scotland, despite knowing Chris was on the way, that he was bringing plans, that he was expecting to meet in London.

It was December. It was snowing. And Chris had to make his way to Scotland to catch up with Charles.

Now this may seem mean, but we did laugh. John Graham and I had gone through five years of Chris’s own unannounced arrivals, departures and disappearances, seemingly unconcerned with how he might be inconveniencing us and the team working here. The guy telling us the story was laughing too, somewhat bitterly.

Maybe experiencing such a lack of consideration from Charles would give Chris an idea of how his clients felt about his own “failures to communicate.” Maybe.

There’s some conventional wisdom about the necessary concessions ordinary beings must make in dealing with geniuses. I just don’t buy it. Chris caused way too many crises for Jim Dow, his partner in the building of our house, and for Curt Brown, his brother-in-law, who was lead carpenter. Jim was afraid he’d go bankrupt, and Curt was so upset by Chris’s disregard for the needs of Curt and his team, I began to wonder if clan get-togethers would be impossible in the future. Chris wasn’t trying to mess with them—he was just oblivious. Perhaps other geniuses don’t mean to cause harm either. But such intense focus on their own thinking can mean that nothing else gets through, making life hard for their families and associates.

The other client had his own stories of Chris’s obliviousness while building a house in the Colorado mountains. It had gotten intense when Chris insisted that all the windows be hand-made, in California. Seemed a bit much, but the client agreed to the making, then balked at the wild cost of shipping. He told Chris he was driving a truck to California to pick them up, then would drive them back to the site in the Rockies. (That’s a helluva drive.)

He and his wife got to Berkeley and Chris, knowing they were there, ignored them for most of a long day. Tired, hungry, and pissed, they finally got the windows, drove home, and said "No more." They finished their house without him. 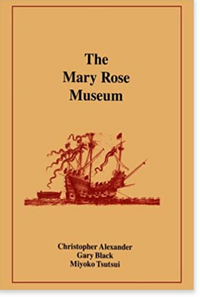 That’s the piece we got of the Mary Rose story, but there was so much more. Chris and two associates, one of them the superb engineer/architect who worked with him on the Whidbey house, Gary Black, wrote a whole book called The Mary Rose Museum, and it is fascinating (though it says nothing about Chris being stood up by the Prince).

It starts in 1990 when Chris was asked to meet with Charles to discuss some “general architectural matters.” Made sense. The prince had been speaking out against new buildings in London, saying that architects were damaging the city more than Luftwaffe bombs had. He knew of Chris’s writings on the matter.

The Prince had some drawings for a museum to house the ancient ship, a great historical find for the nation. He thought the proposed glass and steel structure awful. Chris agreed. Charles picked up a pencil, made a sketch and said, “Couldn’t we do something like this?” 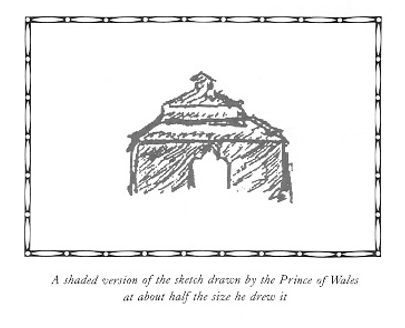 Chris was quite sure “something like this” could indeed be designed. He brought the idea and the prince’s sketch back to his team in California and they set to work.

The drawings Chris may have taken to London—and then Scotland—may have included these early ideas... 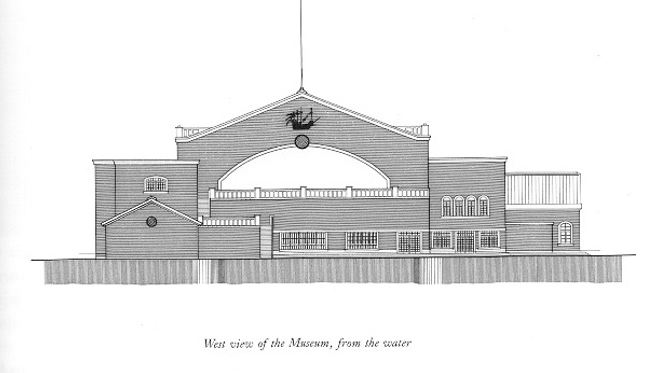 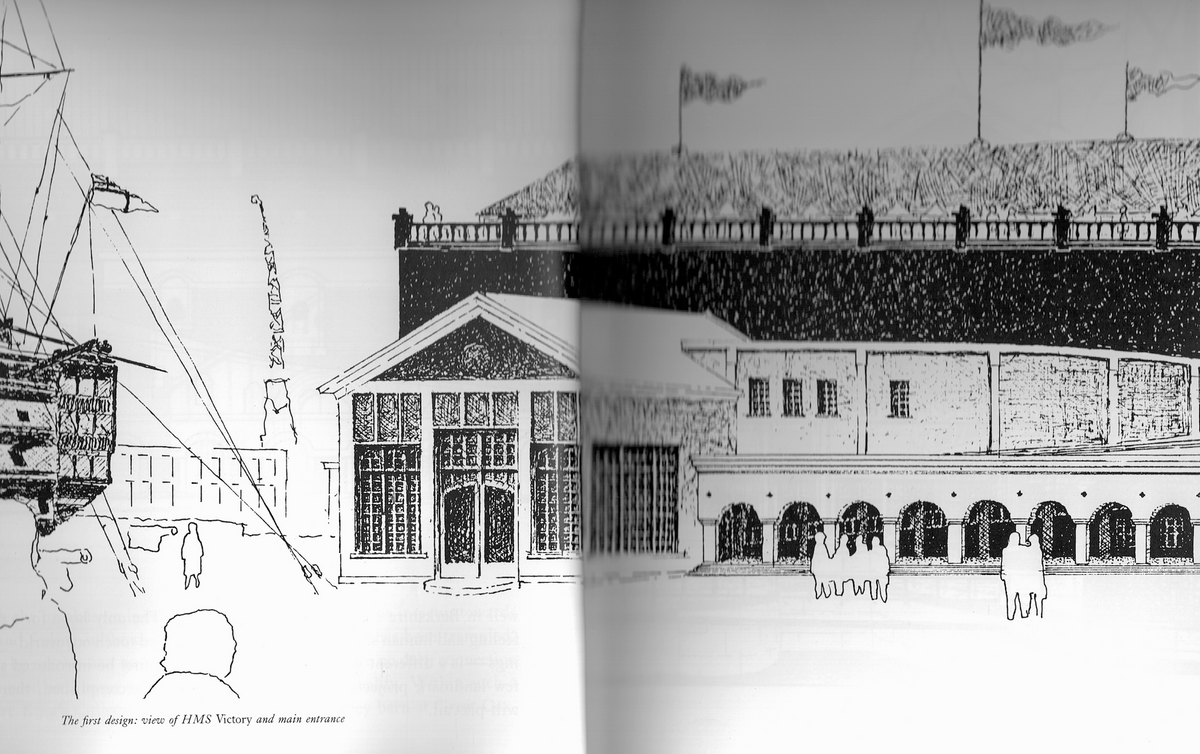 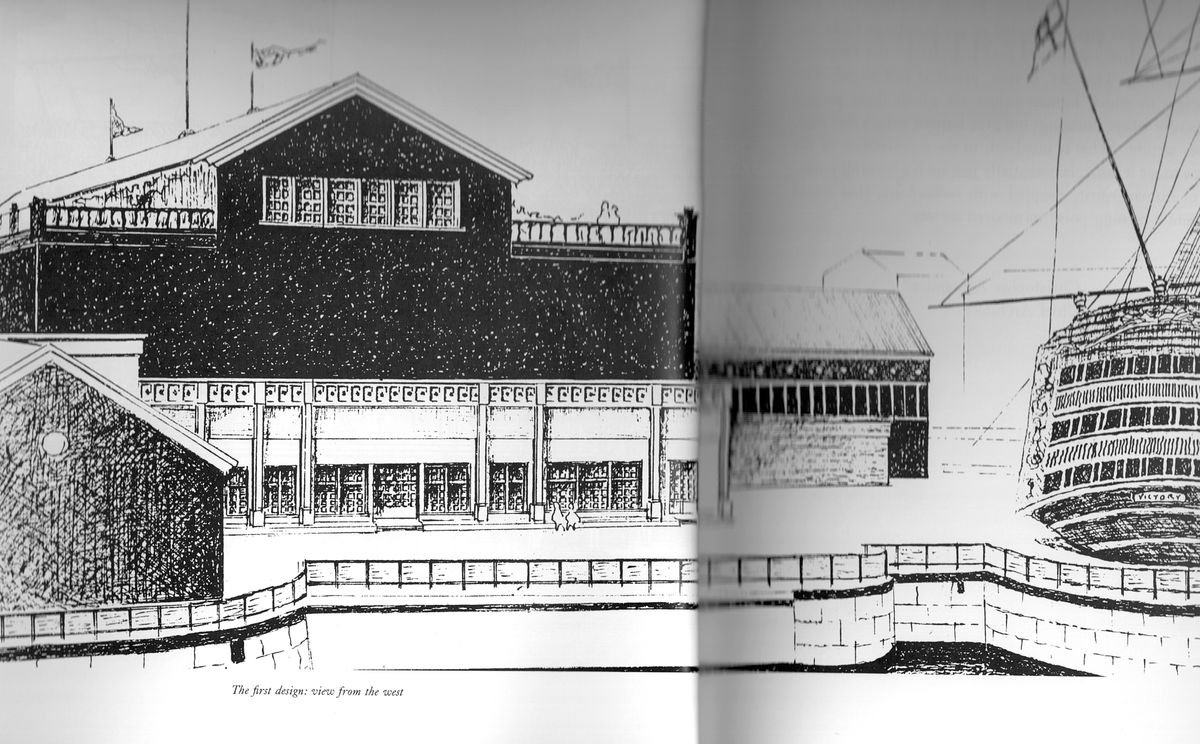 Apologies for the awful scans. But as you can tell, this place is lively—there are people in, around, and on the building. It echoes forms, design themes and materials that surround the site, on the old Portsmouth waterfront. It’s human-scale, inviting, celebratory.

I sense Gary Black’s engineering expertise in the elaborate work the CES team did to plan for the stability of such a massive structure on a muddy site. An awesome feat. We’d watched Gary solve such issues here, on rumpled, dicey terrain.

The story of how their beautiful, inviting, respectful design came not to be is long and sad. You really should get your hands on that book, The Mary Rose Museum, to see all the gorgeous drawings Chris and the CES team made, and follow the drama. It seems that even princes don’t always get their way.

This is what was built.

It looks like aliens have landed and will soon liftoff, the Mary Rose captured and removed to another planet.

The Portsmouth site, in all its classical beauty, was totally disregarded and disrespected. Instead, the nation got what Chris called elsewhere “brute force, functional, industrial gloom.” I can barely imagine a less inviting structure—wouldn’t go inside that thing if you paid me.

Despite his failure to prevail in Portsmouth, Charles remained a believer in Chris’s work, speaking of it years later in a major address to his nation’s architects. 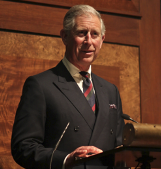 “One of the most important series of books of recent times, in my view – Christopher Alexander’s The Nature of Order – is both a compendium of living patterns seen in nature, absorbed over millennia into human traditions of building, and a brave search for the underlying principles that give rise to these patterns everywhere we look. It reveals, as well as anything can, why we can often recognize nature, and our own reflection more readily in a classical column, or in a humble farm building well-constructed, than in some glitzy new waveform warehouse. There have been architectural form languages and pattern languages practised over millennia that nourished humanity, and sustained human society, just as much as did our spoken languages.”

He went on to point out something I’ve noted elsewhere—architects may design wild-ego, high-tech stuff all day, but when they go home...

“The other day an architect friend of mine asked 'How many Pritzker prize-winners are not living in beautiful classical homes?'; and we all know what he was getting at. Surely architects flock in such numbers to live in these lovely old houses – many from the eighteenth century, often in the last remaining conservation areas of our towns and cities that haven’t yet been destroyed – because, deep down, they do respond to the natural patterns and rhythms I have been talking about, and feel more comfortable in such harmonious surroundings...”

Or as a bemused American architect once said, “Who wants to live in Architecture? Architects are more likely to live in old, renovated barns.”

Yet the beat goes on. Beauty and grace, comfort and delight, are banished from Architecture, no matter how much that damages communities and human lives. Chris remains a renegade thinker/practitioner in architecture, despite the embrace of his discoveries by other disciplines and professions.

His great sin, according to the ego/tech architects, was claiming that there is such a thing as objective beauty, that it has rules, parameters, form, and that those who do not understand and use them are creating a built environment that in its ugliness and disrespect for our human need for beauty is destructive for people, communities and the world.

Keeping the work of Christopher Wolfgang Alexander alive in the world is a mission worthy of devotion. Here’s the best place to plug in to that ongoing work: www.patternlanguage.com

A great team of people who know how important Chris’s work is to the sanity of the world is working now to create an online archive where people anywhere can access his thinking. I just kicked in some bucks to help them cover some of the expenses involved. You can too.