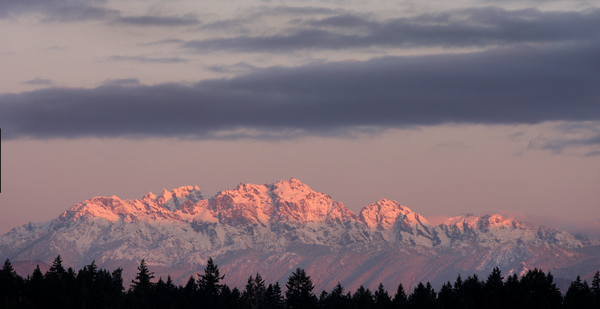 A rumination on being a mountaineer's spouse, written in 1993...

Here in this upper left hand corner of the US, we are set apart by mountains. They stand tall to the east and the west, defining our place in the world, giving us our sense of being particularly blessed. Like most of us, I’m thrilled when they come out, revealing their magnificent selves after days of hiding in rain and mist. Unlike most of us, I live with an extra thought about those peaks—my mate has stood on the summits of most of them and may well be hanging from a carabiner somewhere near the top of one, even as we speak.

In the 11 years we’ve been married, that information has invariably prompted horror and dismay from my friends and family. "But people get killed up there!" "Avalanches! White-outs! Crevasses! Frostbite! Gangrene!" "Aren’t you scared?" "Why does he do that?" and especially this one: "Why do you let him do that?"

I’ll bet you think that all mountaineers’ families are on constant campaigns to keep them at sea level. That’s the way it is in the movies—a guy climbs, his wife weeps and begs him to stop. So why do I find that unthinkable?

The basic answer is—he belongs up there. It’s his nature. This is a guy who went into the mountaineering record books at 22 for climbing the Wickersham Wall on McKinley. He’s climbed all over the world. He’s taught hundreds of people to climb near-vertical ice, rock, and snow. He understands mountains; he loves mountains. That’s who he is. And I like who he is.

It’s not that I want to be a widow; we have a great life together. But my world does not go on hold when he loads up his ropes and heads for the Cascades or the Olympics. I’ve got a great job and two books I’m writing and tai chi classes and I’m going down to Ashland to see the plays...

I seem to stay involved in all this stuff rather than absenting myself to worry about what may be happening on the mountain. He’s as competent up there as anybody can be; he won’t do anything boneheaded, and if a mountain does something beyond his control—well, there are much, much worse ways to die.

I kept that in mind in the wee hours of a Monday morning when I hadn’t gotten the usual, “we’re down” call from a distant payphone. The last ferry had tied up on Whidbey Island and he hadn’t come clanking into the house. So I was on the phone with one of the ace volunteers who search for lost climbers. "What color is his parka? How many in the party? Did he say which side of the mountain they were doing? Were they carrying avalanche beacons?"

I did not like these questions. I especially did not like them when I found out what had happened. The party had indeed been stranded for the night on a summit, but one guy had come down in the dark, with all their home phone numbers. He called at breakfast time, not wanting to wake anybody up. I guarantee you no spouses had slept through that night.

Now that was boneheaded. That made me mad. But it didn’t make me say give it up. I just had a few words to say about climbing with boneheads.

He’ll climb as long as it’s his nature—but I’d like him to be up there with people who understand that the first thing you do when you come down, is phone home.