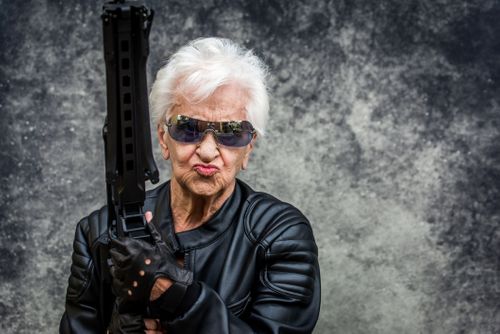 A G.O.B.'S DECLARATION OF PISSED-OFFEDNESS

I’m not good at regrets, partly because I seem to have been born without a rear view mirror. I’ve always been charging on to the next thing.

Now, with so many years behind me, I’m looking back and not seeing many things to regret. There have been godawful events but they’ve made openings for good things to come so I’m not regretting most of the slings and arrows I’ve been hit with. You can even get novels out of those bad-to-good sequences.

I probably should have been nicer to my mom but there’s that rebellion thing that actually can be good, especially since she pretty much cut me off at the knees, sure that her main duty as a parent was to make sure I wasn’t conceited. She was so successful, I was more than half way through my life before I knew I was good at anything. So, even thinking about my angry battles with her, I’m not entirely regretting my words and actions.

Being in your 80s means understanding things you didn’t before (unless you’re so dense that life can teach you nothing). I’m understanding big stuff about being old. Like how vexing it is to be treated with amusement. Little old lady, nattering on, isn’t she charming? No. She’s not. And if you do that condescending thing again she may unleash some serious whoop ass on you.

Nobody likes to be patronized, of course, and let me tell you, when the patronee is ancient, there can be storms of Who the hell do you think you are? and You have no idea who I am so back off on the cute assumptions.

On that count, I have a big fat regret. I did it. Decades ago. And it’s on film. Hundreds of thousands of people saw it on public television all over the US. I was interviewing the great Hazel Wolf, who was in her 80s, and I was patronizing as hell. She was a sly one and quite used to being under-estimated by squirts like me. She’d even used her harmless-little-old-lady act to smuggle medicines to Central American revolutionaries. But I cringe when I think of that interview, made even worse by a sound track of “A Bicycle Built for Two,” not my doing but still, I wish I could apologize.

Since she’s been gone for decades, I will instead mouth off whenever it happens in these times, to me or to any of my surviving peers.

So watch it, dude. This is no sweet little old lady. This is a Great Old Broad, full of experiences you haven’t had, sure that she knows what’s going on, a master of the barb, armed, and you have no idea how dangerous.###