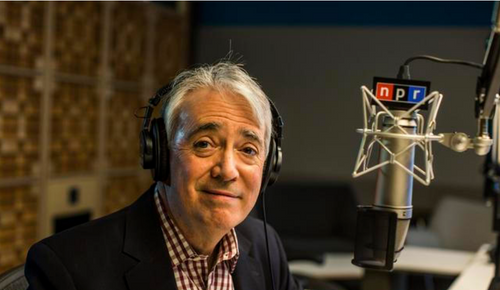 This is a transcript of an interview that never happened, a form of fake news, if you will, but a good-humored one, with laughing apologies to the real Scott Simon.

Scott Simon: Welcome to Morning Edition Saturday, Ann Medlock. So glad you could be with us.

AM: Delighted to be asked. Let’s talk.

SS: Let's. I'll start with the cliché observation—you’re something of a late bloomer, aren’t you.

SS: What took you so long?

AM: Well, start with being a 50s good-girl, trying to fit into that template for bright young things. Two marriages, two sons to raise, ad hoc jobs along the way. The jobs usually involved word-smithing—it may not be in your briefing notes but I was, for instance, the English editor of Viet Nam Presse, their government news service to the foreign press corps in Saigon.

SS: You’re right, I did not have that in my notes. But I do have that you were the speechwriter to the Aga Khan. Good Lord. How did that come about?

AM: A New York dinner party. The Aga Khan’s US rep bemoaning the fact that the boss was coming to the city to give a speech on Islamic architecture and he had no one to write it. My best friend was sitting next to him.

SS: And she told him you were an expert on Islamic architecture?

AM: No, that I’d been a speechwriter at the Democratic National Committee. I didn’t know a thing about architecture of any kind. But I’m a quick study.

SS: And the dream job you mentioned was ... is the Giraffe Heroes Project. I take it that’s not about saving wild life.

AM: Right. It’s about finding people who are sticking their necks out for the common good and telling their stories to the world. I’ve been doing that now for 36 years.

SS: I looked at giraffe dot org and I’m impressed. There are over a thousand stories of heroes there.

AM: Free stories. About real heroes. Not people who are just gorgeous or talented, or bullet-proof cartoon characters.

SS: And there are classroom lessons for high-schoolers down to kindergarteners.

AM: All based on the stories. And on a belief that kids are inherently empathetic. When I was a curriculum developer at Chicago and New York publishing houses, I didn’t see my bosses believing that young human beings are by nature that good-hearted. I had to be in charge to make materials like that happen.

SS: And the poet? The novelist? Where were they in all this?

AM: Silenced. I didn’t believe I could do those things no matter how much evidence there was that I probably could. My own thoughts and feelings, my own story, Out There? No way.

SS: But I’m looking at Arias, Riffs & Whispers, your book of poetry, and Silence of the Seamaid, your novel. What happened?

AM: Hedgebrook happened. A retreat for women writers. I was on the board for years, providing sanctuary for other women to make their voices heard. And there was this nagging, "What about your voice?" So I quit hiding and put together 70 of the poems I’d been writing. In 2003, when I was 70.

SS: And it took the next 18 years to write the novel?

AM: It was more like 35 years. I’d written pages and pages of it, over decades. It just took me more years of evenings and weekends to patch it all together and make it a coherent story.

SS: May I say I’m grateful you kept going? I love these books.

AM: You certainly may. Thank you.

SS: OK here’s the part where I ask you to read something I especially liked. Would you read “Space Time Non-Continuum”?

AM: You would ask for one that’s a gut punch. I think I can get through it.

AM: Yeah. Ouch. Sorry. A lot of them are like that.

SS: No no don’t be sorry. You totally got that awful feeling you get when you’re in a place that was once so terribly dangerous.

AM: And, I hope, the inanity of the later commercializing of that dangerous ground.

SS: Ah yes. That too. Ann Medlock, thank you for the poetry, for the novel, for the Giraffe Heroes Project. May I ask what’s next for you?

AM: Going on with the Giraffe Heroes stories, of course. And two more books.

AM: The first one's about architecture. Which I once knew nothing about. Now I've built and have been living in a house designed by the amazing Christopher Alexander. That's all given me a lot of thoughts on what kind of architecture helps people stay sane.

And I'm taking a laughing swing at a cautionary kind of memoir, how to get through the dark forest of life—I'm calling it Bread Crumbs.

SS: The late bloomer continues to bloom. I’m going to rethink my expectations for the years ahead of me.

AM: Do. The templates you’ve had for being old may be all wrong. Mine sure were.

SS: Thank you for busting up those templates, Ann Medlock.

AM: You are so welcome, Scott Simon.

SS: Ann Medlock is the founder and creative director of the nonprofit Giraffe Heroes Project and the author of Arias, Riffs & Whispers; Words Written for Voices, and of Silence of the Seamaid, a novel. She is now working on Bread Crumbs and on Building with Christopher Alexander; An Illustrated Memoir. She was born on May 6, 1933.