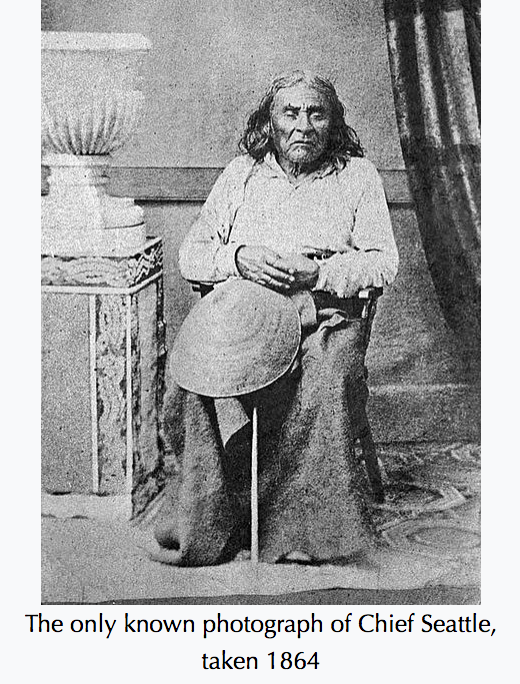 Chief Seattle Speaks~Or Does He?

It isn’t what the Chief had in mind, we’re sure, but over the years he’s acquired a couple of ghost writers (in the sky?).

The gorgeous environmental speech that is everywhere attributed to the nineteenth-century tribal leader was, in fact, written by screenwriter Ted Perry in 1971 for a film on ecology. And Perry based his script on the work of one Henry Smith who probably made up a good bit of it.

Shocked? So were we. We published the full text of the speech, which is seldom seen, as the back cover of the Giraffe Gazette a couple of years ago. Then John De Graaf, the filmmaker who wrote and produced the public television documentary on the Giraffe Project, called and said, “Guess what?” He’d learned the truth while working on a documentary about Chief Seattle’s people — what remains of them. Paula Wissel of KPLU public radio in Tacoma did a report for NPR’s Morning Edition that told the nation the real story.

In December 1854 Chief Seattle made an impassioned speech in his own language, Duwamish. He and his people were meeting with the Territorial Governor, who was pressing them to sign away their lands in exchange for protection on a reservation.

Dr. Henry Smith was present and took notes, which he wrote up 33 years later and sent to the Seattle Sunday Star. Dr. Smith had been in the area only a year when he made those notes and one suspects his Duwamish might have been a little spotty. He was also known to be a poet in his non-medical hours; the Duwamish were plain, unflowery speakers, so the one eyewitness account of the speech is highly suspect.

Ted Perry heard Smith’s account read at an Earth Day gathering in 1970, when he was planning a film on the environment. He decided he would write a soundtrack in which a fictitious Native American called for environmental responsibility.

Perry told us that he’d mentioned Chief Seattle as his inspiration for the script when he turned it over to the producer. The script also mentioned the Chief by name, which Perry sees in retrospect as a “terrible idea, although at the time it seemed innocent enough. If I had been writing a play I wouldn’t think twice about having a fictional Abraham Lincoln say things I wrote, expecting that the audience could figure out from the ‘written by Ted Perry’ that the words were not actually those of Abraham Lincoln.” But when the film aired on ABC in 1972, the producer had given Perry no “written by” credit. When Perry protested; the producer said the words sounded more authentic presented as Chief Seattle’s.

Since then, to his great embarassment, Perry has seen the speech turn up in the work of Joseph Campbell and Buckminster Fuller, in songs, oratorios, even on zoo cages. “One time I had it read to me at church as the sermon for the day.” Perry says that Giraffe John Seed got the story right in his book Thinking Like a Mountain and that, “for years I have been telling the truth about the text whenever asked.” Still, he describes himself as cringing at his role in the misattribution.

But when you think about it, the producer was right. How many of us would have put an environmental quote from a guy who teaches film at Middlebury College on our refrigerators or office walls or magazine pages? But what fine and true and beautiful words they are. It’s time we thanked Mr. Perry. Here, for your posting, are his most famous words:

“The earth does not belong to us; we belong to the earth. All things are connected, like the blood which unites one family. Mankind did not weave the web of life. We are but one strand within it. Whatever we do to the web, we do to ourselves.”— Ted Perry