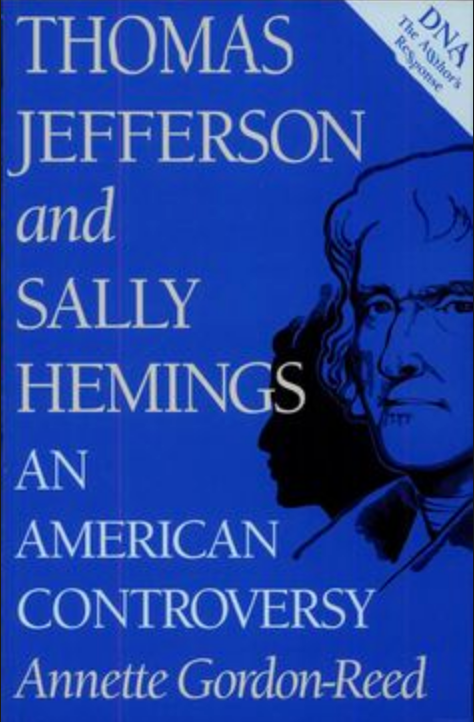 When Nature magazine announced that Jefferson’s DNA matches that of one of the children of Sally Hemings, the slave long rumored to have been his mistress—I was cheering.

The Jefferson/Hemings story has been dismissed by generations of white, male historians who could address their hero’s ownership of slaves but dismissed out of hand the possibility that he slept with one of them for 30 years, that he had children by her.

I got onto this story in 1963, when I went into the Library of Congress’s rare books collection and Jefferson’s own papers in Charlottesville, pursuing the story. I’d first seen it in a French history of the US. Poring over old books and papers, I found a great deal of plausible but inconclusive material that made me think the story was true and none that proved it was not.

The resulting paper was for a history seminar at the U. of Maryland. It showed that the story of Jefferson’s slave children had been widely reported during his presidency and that it had reappeared many times in the years since then. The paper could only be titled, “Jefferson and ‘Black Sal;’ The Record of a Rumor.

Jefferson had never denied or confirmed these children’s existence but he freed them in his will—an extraordinary act for a gentleman of his time and place, especially one who was leaving massive debts behind him. Madison Hemings had given a credible account of Jefferson’s relationship with Sally Hemings, and with her/their children, he being one of them; the account was routinely dismissed by historians. The same historians gave full credence to an illogical and incoherent report by white relatives that two of Jefferson’s nephews had fathered Hemings’ children.

The condescension and hypocrisy of this was appalling. So was getting a D on the paper. The professor said it was because undergraduates were not supposed to do original research, but the real reason was clear—he was one of those white historians who wanted it to be a lie and he was expecting an unequivocal refutation in my paper.

If you haven’t read any of the books that have since been published on this, do read Annette Gordon Reed’s, Thomas Jefferson and Sally Hemings, An American Controversy. Gordon Reed is a law professor and presents the “evidence” in the “case” clearly and objectively, as a good lawyer should. She looks at far more documents than my undergraduate self found, and considers the witnesses’ credibility. Her conclusion was the same as mine: there were a strong indications that it was true, but there wasn’t absolutely conclusive evidence, either way.

I talked with her the night after the announcement and we shared our delight that the nonsense finally has to stop. Amazingly, she reports that there’s still an effort to weasel out of it, saying that the DNA only proves that Hemings’ last child was Jefferson’s. “Yeah, like he only started having sex with her when he was 65,” says Gordon Reed.

I have never understood historians’ determined denials. Of course it would be better if Jefferson had been perfect—so much of what he did and was is at the core of our image of America at its best. Owning the woman he was sleeping with and then owning the children that resulted, were reprehensible—but I guarantee that’s not the reason for all this denial. It’s that she was "black.”

Now, I come from a southern family and let me tell you, “miscegenation” has a long history. At the low end of the social scale, Ole Bubba Redneck may hate blacks, but part of that is feeling entitled to rape them. And at the upper end, Ole Massa definitely exercised that “right.” There’s an appalling maxim in the south: “You’re not a gentleman until you’ve had your ‘black oak.’” I’d be amazed if there are any southern white families that have no history of crossing the color line sexually.

(I lived in the Congo for a while, where the range of skin colors went from a dark brown to a black so deep that sunlight looked blue on the skin; African Americans looked almost as out of place there as Scandinavians. Yet US culture absurdly calls all these incredibly mixed-heritage people “black.” It’s all too strange.)

Within his own time, place and class, Jefferson’s actions weren’t even unusual. The particulars of his actions make them even easier to imagine. As in—Sally Hemings was herself the child of a half-white slave and a neighboring plantation owner whose legitimate daughter had been Mrs. Thomas Jefferson—the wife he adored and lost when he was still in his 30s, the wife who begged him on her deathbed never to remarry.

The young Jeffersons had inherited her father’s slaves, among them her half-siblings. Contemporary accounts describe young Sally as auburn-haired, fair-skinned, and looking a lot like Mrs. Jefferson. Despite all our contemporary objections, despite any objections Sally Hemings may have had, Jefferson’s taking her as a slave-mistress would have made sense then, there, for him. It meant he could keep his promise to his wife and have decades of sex with a beautiful woman who was very like her. He may have even loved Sally Hemings. She may have even loved him. As I recall, Madison thought that was so, and he was there.

According to this son Madison, his mother had wanted to stay in Paris, where she was nanny to the Jefferson’s youngest daughter. She agreed to return to Virginia only after Jefferson promised to free any children she might have, as soon as they were 21. To us, an odd bargain, but one that they evidently both accepted and observed. Sally’s duties at Monticello were light; their children were trained in arts, letters, and crafts, which served them well when they were indeed freed.

There is far more to the story; do read Gordon Reed, who has written a new, post-DNA forward to the book.

Perhaps the DNA report will help us to grow up, to acknowledge the incredible complexity of every human, no matter how admirable. It is now fact not speculation, that the most admired President in our history had sex with a “black” woman he owned, for decades. Jefferson was not a philanderer and didn’t lie about the long affair; he simply ignored the vilification that was heaped on him and went on with his myriad interests.

The story abounds in moral food for thought. Meanwhile, I have this sudden urge to appeal that D to the powers-that-be at the U of MD. It shot down my 4.0, not that I’ve carried a grudge or anything. And I wonder if that prof has lived to see this, for him, terrible day.