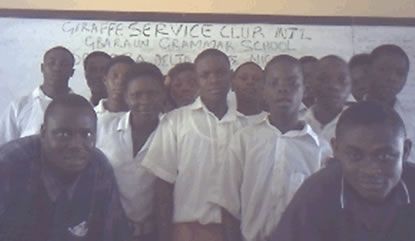 Killing "Rebels" in the Niger Delta

The people looking at you in this photo are Job Bebenimibo and his students in the Giraffe Service Club International in Oporoza, Nigeria.

Take a good look. They may all be dead. On May 16 the village of Oporoza was attacked by the Nigerian military. The villagers who survived fled into the bush, where there is no medical care and no food. There may be no homes to go back to if they survive.

The kids were inspired to do service by Giraffe Joel Bisina, who is a fellow Ijaw, and by the book Voices of Hope, a compendium of stories about people around the world who have stuck their necks out for the common good.

If you Google for news about the attacks in the Niger Delta you'll get a version that reads like it comes straight from the PR departments of multi-national oil companies and the Nigerian government: the military is re-establishing order in the oil-rich region by shutting down the rebel elements who have been disrupting oil extraction and exports. Order. Rebels. Oil. Sounds reasonable in a realpolitik sense, if that's your world view.

The makers of the film Sweet Crude are getting a different story. The team has been in the Delta repeatedly, filming a devastating picture of what oil extraction is doing to the people who belong to this land. The "rebels" have demanded that some of the wealth being taken out of the Delta must come to the Delta's people. Instead, extraction has impoverished the people, polluting waters and land that have always sustained them, and giving them none of the profits being made by the oil companies and the Nigerian government.

There are echoes here of the coverage of the Somali pirates - way too simple a picture was presented by the news media. It took online sources to point out that the pirates began as an ad hoc Coast Guard trying to stop first-world ships from extracting all the fish that had sustained Somalis, and dumping deadly chemical wastes in their waters. So much easier to present them only as self-serving privateers, never mind the outrageous provocations that started it all.

Nigerian friends of Sweet Crude have managed to get first-hand observations out via laptops and cell phones. What's really happening is the eradication of entire civilian populations, women, children, elders, school teachers and students included. Oporoza no longer exists. We don't know yet what has happened to Mr. Bebenimibo and the kids who teamed up to be of service to their community.

If this concerns you, link up with the Sweet Crude http://www.sweetcrudemovie.com team for ongoing reports. Try to get through to John Kerry, Chair of the Senate's Foreign Relations Committee. Send a message to your own Representatives and Senators.

Somewhere in all those offices there's got to be someone who cares more about kids and their teachers than oil company profits.