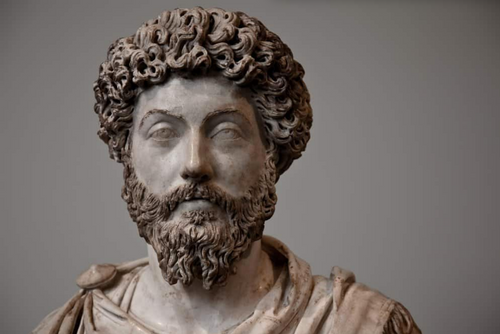 MARCUS, THE MOMENT, AND ME

I have to tell you, I’ve never liked to read second-person writing. I start seeing “you this” and “you that,” and my authority-resistance goes to full brat mode. Book slamming follows.

So never mind how good his reviews are, I didn’t read Marcus Aurelius; his stuff is all second-person. Doesn’t matter that he was a philosopher and a warrior and the best of all the Roman emperors, who was he to tell me what to think, what to do?

Then I read that he was talking to himself. The “you” was him, page after page–or lambskin after lambskin–Marcus nudging Marcus.

Well alright then. I was up for reading what he had to say to himself.

I now consider him one of the best friends I’ve ever had.

I have several piles of books that have survived my giving away hundreds that I’ll never read or re-read. The survivors are mostly meaning-of-life ponderings. Now that the actuarial tables say I should be long gone, I figure I really should figure out what living and dying are about.

A lot of writers are good on the living part. Certainly Aurelius and all his fellow Stoics had that figured out. The meme sums up their amor fati, an early version of Be Here Now that went beyond that to accepting and–oh jeez–loving whatever comes at you.

I’m working on that.

I’d say most books about dying are not all that good – Aurelius aces it. Talking to himself, he points out that death only takes the moment you’re in. It can’t take your past because you’ve already lived that, over and done thank you very much. It can’t take the future because that doesn’t exist. So there you are, losing a moment. Just that moment.

That may have been the first time I’ve ever laughed out loud while contemplating death. Marcus, talking to himself, gave me a way to live these post-actuarial years knowing that death means only losing a moment.

Some of the moments I’ve already lived have been magnificent, even the rotten ones that had to happen so some great ones that were coming could get to me.

So that's The Plan. I’m just going to keep stacking up moments, good and bad, that can’t be taken from me – because I've lived them.