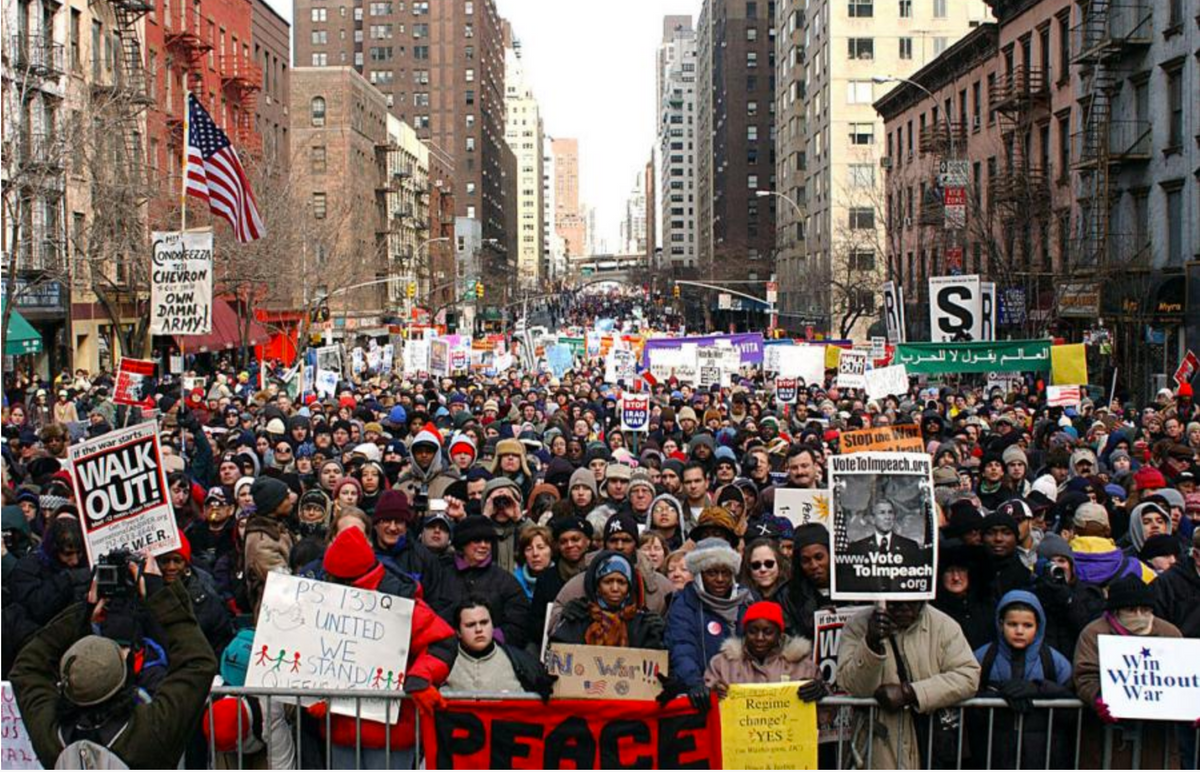 Our Little Lives & the Big Picture

Friend of mine, a fellow writer, put the question to his email network last week: Would anyone join him in a hunger strike for the closing of Guantanamo?

He figures we have to do something to keep the Administration from destroying everything this country should stand for. Life’s been pretty tough for him lately and he’s decided he’d rather go out fighting for something big rather than being quietly done in by his malfunctioning body.

Talk about putting it right in your lap. I had to think long and hard about that one.

I couldn’t agree more that we have to do something. And I don’t think anything I’ve done so far means a damned thing to the Bush Administration, so he might be right that to-the-death hunger strikes are the next logical step.

Millions of us across the world marched to stop the invasion of Iraq. Minor annoyance—perhaps—to Bush/Cheney, but we didn’t even delay the attack, much less stop it.

I marched with labor unions at the WTO protests in Seattle. The agreements went right ahead and are doing exactly what the unions said they would do—erase US blue collar jobs.

I’ve made campaign calls for Congressional candidates, pressed everyone I know to vote, written compelling messages to legislators. And Congress is still letting the Constitution be subverted.

Cheney/Bush have been quite unimpressed with my/your efforts. I suspect that if a few of us publicly starved ourselves to death in protest against their most impeachable actions, their only reaction—if they noticed—would be mild pleasure. Fewer kooks mouthing off. What could be bad about that?

My friend sent out the responses he got from writers all over the country. One urged him to stay alive and in the best possible health so he could keep doing the mouthing off. One signed on, even said he had a boat they could use to anchor off Guantanamo. He’d decided that his almost-80 years were enough. The rest of us said No thanks.

There’s this problem a lot of us have—we like our little lives. In the big picture, things are going to hell in that hand basket. But in the micro, I’ve got this book I’m working on and it’s going pretty good. I recently found a longlost son and I’m having a grand time getting to know him and his family. The view of the Olympic Mountains from my window still gives me goosebumps. A medical scare turned out to be a false alarm, leaving me in good health and high spirits. There’s a Mozart concerto playing across the room and it’s gorgeous. In my day job, my estimable mate and I are making progress in getting people to become engaged citizens.

And here I am saying that I am not “engaged" enough to give up my little life in hopes of stopping the public villains I so oppose.

In hopes. There’s the sticking point. I’m banging pots and pans, Molly Ivins, like you said we must. Encouraging the moves toward impeachment, sending my little checks to candidates who speak for honorable public policies, for the people and against corporate greed.

I’ll get back on the phone, go back into the streets, keep blogging. “In hopes" that maybe, just maybe, we’ll manage an honest election next year and turn these unAmerican lunatics out of power.

I know I’m walking a line here. It’s the one too many people walked too long in Germany as the Fascists drove them straight toward the cliff.

I’m gambling that we still have a chance to put the country back on an honorable course—with our votes instead of our lives.

But if we’re faced on November 5, 2008 with President-elect Giuliani…. OK friend, maybe that’s when my little life goes on the table. But for now, I’ll keep banging them pots—in hopes.