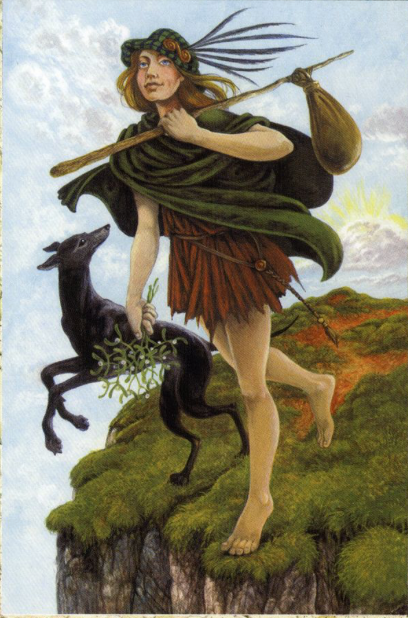 For everyone who's read through J.K. Rowling's epic—it’s been a grand ride, hasn't it?

Thinking about the Potter phenomenon, I've been beguiled by the backstory—Repeatedly Rejected Manuscript Becomes Publishing Phenom—and annoyed with the critics who have dismissed the books as “rehashes" of earlier stories.

How about “re-telling of myths deeply rooted in our psyches"? That’s what I see in the series and in the world-wide thirst for them.

The archetype of the Holy Fool is foundational in our understanding of humanity. Parsifal, who is the embodiment of the Fool in western culture, “goes into the dark forest, alone, at a place where there is no path." Parsifal must find the Grail. Harry must find and destroy the objects in which evil is stored. In both stories, finding these hidden objects will stop the suffering of the people.

Harry begins the tales a child and grows into the beginnings of manhood as evil forces grow stronger and more oppressive of the people. Like Parsifal, he’s too young, too inexperienced. Others more qualified have tried before him to stop the malevolent Lord Voldemort and have failed. But no one else has the smallest chance of succeeding. Harry accepts the quest, because the suffering of the people must be ended. This is Parsifal revisited.

I’ve spent decades of my life writing about courage, finding ways to move more people into courageous action for the common good. The linchpin is usually a person who, like Harry, like Parsifal, steps forward alone, taking responsibility even when they may not seem the best person in the world for the task. when the odds look impossible and dangers abound.

The turning point in so many of these real-life stories is the moment when others, good people previously silent and inactive, see one brave soul stepping forward and say, “We’re with you," coming to the initiator’s side. It’s the moment when a movement is born, when hope comes to life and change becomes possible.

It’s the moment in the last Harry Potter book when this reader was overcome. As the 17-year-old boy accepts his fate, overcomes his fears, and moves into action against the seemingly all-powerful Voldemort, he is astonished to find other characters in the tale rallying to his side, refusing to let him proceed alone, insisting that they fight beside him.

That’s the goal of my work at the Giraffe Heroes Project—the enCouraging of the good, caring, quiet people who can look at what a Giraffe Hero is doing and realize that they too need to stand up and sound off, to take a stand for what is right.

I haven’t cried over a “children’s" book since I was a kid myself, but Rowling got me when the good people in Harry’s life chose to stand beside him and fight. It was the perfect turning point in this new and strong telling of an old, old story.