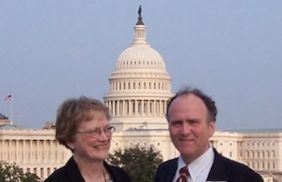 Philomena and Me... and Our Michaels

When the film "Philomena" went into wide release and was nominated for four Oscars -- I had a few words to say about the film and about the facts it was based on.

You might say I have standing in the matter.

The movie begins in an Irish convent, where Philomena Lee—an unmarried girl—gives birth to a son. A few years later, she's still at the convent, doing manual work as payment for her room and board and for the sin of being a "fallen woman." Her son Michael is not there—he's been adopted. Fifty years later, she goes looking for him.

I saw the film with the son I'd named Michael before giving him up to Catholic Charities for adoption 50 years before we managed to find each other. (That bizarre story is here.) It was nothing short of miraculous that we were there, watching together as Philomena came to America, looking for her lost Michael, half a century after losing him.

Philomena learns his name and his fate in Washington DC, where my son was, like hers, a political operative; hers a gay Republican, mine a straight Democrat.

The congruences kept coming. I recognized the orphanage. Oh damn, did I ever recognize the orphanage. When I was about to be visibly pregnant, I was sent to such a "home for wayward girls." I don't think they sold the infants delivered by their inmates, as Philomena's Irish "home" did, and no one was held there for years as Philomena was. But the cast of characters, the attitudes and the cultural assumptions were an exact match.

I knew the sweet nun who slipped Philomena a contraband photo of her son.

I knew the bitter, righteous harridan who ran the place.

I knew the girls like Philomena who accepted contempt and cruelty as earned.

And that's where Philomena's story and mine diverge.

Philomena was submissive; I got kicked out for insubordination bordering on mutiny. There we were, a community of women, some of us nuns, some of us young, pregnant Catholic civilians. The senior nuns assigned us "chores" that included setting the hugely pregnant to scrub floor after floor, to climb ladders and wash windows, to tend to "orphans" in a nursery that would soon hold our own infants. Our cafeteria served substandard food that could not keep us and our developing embryos healthy, while the nuns drank fresh-squeezed orange juice and ate beautifully cooked meals that were served to them on tables draped in white linen—linen that we'd washed and ironed.

I objected. To all of it. The Mother Superior said I had to leave.

There's a spectacular speech in "Philomena" that reveals the pathology fueling both the nuns and the system they served. The orphanage's Senior Harridan lets fly with a venomous outburst about her own celibacy, her lifelong loneliness and her own observance of God's Will while Philomena and her ilk gave in to the desires of the flesh and made these babies that had to be rescued and given to decent people.

I prefer my father's take on "God's Will." When he came to the orphanage to fetch me, the Mother Superior met him, frowning in righteous disdain for his daughter. Dad looked her in the disapproving eye and told her she was a sorry excuse for a Christian.

In the film, the Mother Superior's spew whips a klieg light onto the Church's twisted institutional focus, which has now been called out by the new and astonishing Pope. The obsession with sexual restrictions is and always has been wrong wrong wrong. Wrong to be contemptuous of naïve young women like Philomena and me. Wrong to ignore the men involved in creating "illegitimate" children. Wrong to demonize gays while knowing full well how many men and women of the Church are gay. Wrong to excuse and hide criminal priests, transferring them to new, unsuspecting parishes. Wrong to think that forbidding consensual human sexuality is more important than Christ's message of compassion and forgiveness.

After the film came out, there was a story that went viral about an unmarried, pregnant woman who wrote to Francis, saying she feared no priest would baptize her child. Francis called her on the phone and said he'd do the job himself. Now that's a Christian.

In the name of all who have been harmed by the Church's misogynist, anti-human obsessions, here's to Francis and to the wild hope that the earth's billion Catholics will see him bring that faith into the light of compassion. It's so needed, so long overdue—may it be so. That powerful, truth-telling film just might help him get the job done.