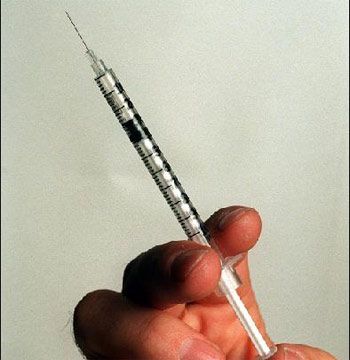 What You "Know" About Rabies Shots is Wrong

Setting: a house in the forest on a Puget Sound island, two people sitting on a porch at dusk, lovely dinner before us, good talk, perfect weather. And some flying thing lands fast on my arm and whips back into the forest. "That was weird." And we proceed with the salad.

A little later I saw there was dried blood my arm. Another weirdness. Washed it off and forgot about it.

Two nights later I'm in a carpool with friends and one stranger, heading into Seattle for a meeting. The stranger turns out to be a longtime veterinarian. We're all telling living-in-the boonies stories and I mention the sudden flight to and from my arm, over a peaceful meal.

Wise vet says, "Dusk? Small, fast flier? And there was blood on your arm? The odds are it was a bat, and healthy ones don't do that."

The dots were suddenly connected. My first question was, "Am I too late for the hideous vaccine?" I still had 8 days to get them started. First bullet dodged.

Reading everything I could get my hands on that night, I learned that rabies is 100% fatal. But what if it was just a bird? What if it was a perfectly fine bat who'd found some intoxicating berries and was just drunk? What were the odds that the one rabid bat on the island had decided to fly into me? I did not want foot-long vaccine needles in my belly, which everyone knows is the anti-rabies protocol.

First thing in the morning, at my family doctor's office, the consensus was total—skin broken, you get the shots—and they didn't have them in stock.

The Public Health service had to have an incident report and confirmed that there hadn't been a human rabies case here for decades. But when they capture island bats for testing, almost half of them have rabies. Well, swell. Long needles, here I come.

I headed up the island to the ER, shaking, but knowing that without the shots I could be frothing at the mouth, going nuts, and dying in one of the most painful ways possible.

The important thing to know in all this: the conventional wisdom is a fiction. I had one shot of vaccine—in the shoulder, and four others—gamma globulin in the wounds, and in the hips. Nothing hurt anymore that any shot you've ever had. And the vaccine is 100% effective in preventing death by rabies.

So pass this on! Warm weather is here, more and more people will be outside in the evening. Bats are out there too. And other critters that might be rabid. If you or anyone you know has a close encounter with one of them, you don't have to fear the shots. Get them!

And thank the family of one Mary Bigelow for the fact that the shots are no longer the nightmare they used to be. Here's the astonishing message she sent me:

"Let me tell you why you get to have 4 shots in the arm instead of 21 in the belly: in one word—my Mom. There were 11 of us who went through the rabies series in the 70's because my cat got bit by a bat and died of rabies. Because it was an outdoor cat and confirmed rabid, they quarantined a 6-mile radius around our house—most of the area was farming cows, horses, sheep, and minks. All domestic animals had to be kept indoors, all livestock had to be immunized, could not be bred during the quarantine, could not be butchered, etc. We were not very popular.

"My Mom had a reaction to the duck embryo so they used her as a guinea pig for the brand new human serum. When we were all done with the horrible belly shots, we donated our blood so they could create the human serum they now use."

So all hail Mary Bigelow and her family! Now go forth and spread the word that everybody's got it wrong about rabies shots. Me, I just had my second round, with two more to go. Zero problem. Freak-out cancelled.

Also no fangs growing, no sleeping in a coffin, and I'm doing just fine in full sunshine. People can now stop holding up crucifixes when I pass.