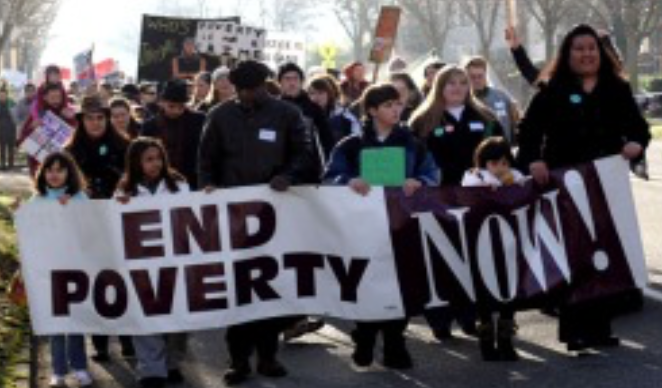 Where are the Voices of—and for—the Poor?

We've got class issues rumbling in this country. Or we should. Doors are slamming on the tradition that class doesn't lock the children of the poor in their parents' world, that with big dreams and hard work, capable American kids can move up.

The main way up has always been education. Barely literate grandparents got their kids to public schools and their kids got to college. You know people who have lived this story. You know me.

All my grandparents left the spoons in their cups when they drank their coffee. That's the shorthand. In public-speak terms, they were lower-class, impoverished, deprived, and uneducated, their families consequently "at risk."

In less polite terminology they were lintheads (cotton-mill hands), blue-collar workers, menials. One was a failed farmer, in a time when that role was losing its value, becoming more commonly described as hick, rube, hayseed.

I never saw a book in my grandparents' homes. When they got television, the sets were tuned to wrestling and soap operas. Conversations were about people, not issues or ideas.

They were English and German, blue-eyed all, with no color issues against them. But they were hanging onto a low rung of the economic ladder. By their fingernails.

My parents didn't settle for the lives their parents lived. They stepped out and up, my father lying his way into the Navy when he was too young to enlist, my mother marrying this fugitive from the mills when she was too young for marriage. A smart guy, he took every course the Navy offered, aced them all, becoming the youngest chief warrant officer in the service. After Pearl Harbor the Navy needed line officers fast and my dad was suddenly wearing gold stripes.

My mother watched and learned, getting good at the ways of this new world. She dressed beautifully. Our quarters were always handsomely fitted out. She and Dad were gracious, well-spoken.

They were far from rich, but there were books and there was music and sometimes conversations about the world. We even listened to the Metropolitan Opera broadcasts on Saturdays.

Still, when I finished high school, their attitudes and the times said that there was little point in further educating a girl. I would take a clerical job until I could find the right junior officer to marry and pursue his career, as helpmeet. If I picked well and worked hard, I might someday be an admiral's wife.

Like my parents before me, I didn't settle. I worked my way through public colleges so cheap I could pay the fees with the meagre earnings from weekend and summer clerical jobs.

It wasn't Vassar or Smith in prestige or in educational content, but it was college. I acquired some furniture for the mind—mostly from the chance to read endlessly in English and history. I had professors telling me I was smart and capable. And I had my ticket punched for jobs you couldn't get without a degree.

It's been quite a ride, and it's still roaring along. I've been a speechwriter for US politicians and for the Aga Khan. I've worked in Japan, France, the Congo, Saigon, on Capitol Hill. I've written books of poetry. As a pioneering curriculum developer and founder of an innovative nonprofit, I've spoken before audiences all over this country and abroad. My work and marriage partner isn't an admiral but a fellow writer who took his own step up in the world via a National Merit Scholarship.

Not bad for the granddaughter of lintheads, hayseeds, and menials. I doubt there's another country in the world where I could have lived this life.

I want every kid with dreams and smarts to have the same chances. That's the America that has intrigued the world, the beacon that lit up dreams far and wide.

Now we can forget beacons and dreams. Blue-collar jobs that paid wages high enough to feed a family are evaporating, making it harder than ever for parents to help their kids get an education. At the same time the cost of college, even at a public institution, is moving farther and farther beyond their reach.

A permanent underclass, populated by growing numbers of people without hope, should be at the top of our national concerns.

We should be talking about a massive G.I. Bill, about an expansion of education opportunities for all young people willing to work hard, about the perils to democracy and to our national identity of stopping Americans' upward mobility.

But no. We're talking about the dangers of two-groom weddings, about building walls to stop the inflow of brown people, about who's going to win American Idol.

It's sleight-of-hand. It's saying to our people, "Look at this stuff that doesn't matter so you won't see that something that matters deeply to you, to the nation, to the world, is being taken from you."

It works for the already powerful. Waves of young people without the hope of ever achieving their dreams make excellent cannon fodder.

Attention must be paid.

By everyone who has believed in the American dream.